In an attempt to make a custard tart like the ones sold in supermarkets and bakeries, I made something visually more akin to a pizza, then used up the half a butternut pumpkin in a pumpkin loaf.

22nd of October, 2011.
I had the house to myself for the night, and went to the kitchen to figure out what to bake. At first, I had decided to make another sweet carrot pie, so that I could eat the remainder of the previous night’s one and still have a pie to share with my returning family.
I made some short pastry (which I found most fun) but decided to broaden my horizons a little and bake something else. I found a custard tart recipe in one of the books.
Unfortunately, the quiche dish once again proved that it is really suitable only for making quiche, and the custard tart became a custard pizza. 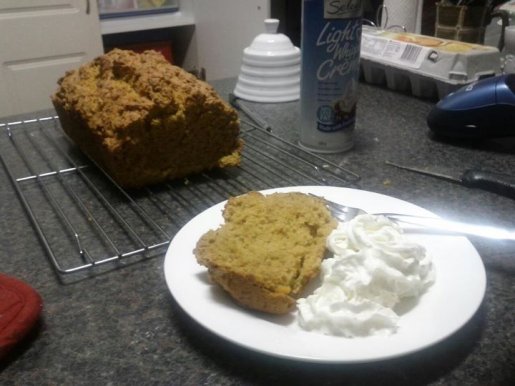 Harking back to the lemon loaf, I figured the pumpkin might be of use. It had been sitting in the refrigerator since I had bought it a few days before. I had intended to learn to make pumpkin pie or pumpkin cake, but had no recipe for either. Instead I used a recipe for a pumpkin loaf.
The loaf was delicious with whipped cream.
My father, upon returning the next day, enjoyed the remainder of the pizza-tart.