I had seen this recipe in the book many times, but had been unsure of using it. Partially because we lacked the canned peaches, but partially because of the added requirement of making short pastry. As it turns out, I discovered that short pastry is a very enjoyable thing to do. 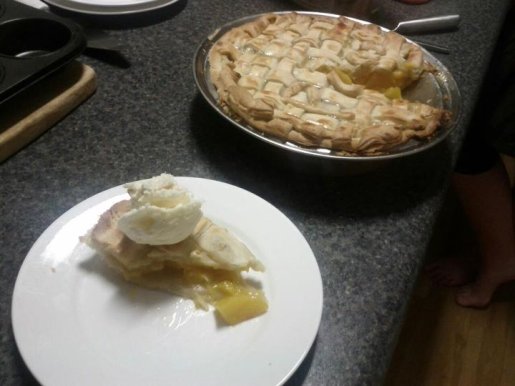 18th of October, 2011.
The book showed a diagram of the lattice-top being made. It looked like an enjoyable challenge. Not to mention I very much enjoy peach as a pie filling.
After I had made the short pastry as per the recipe, I discovered that the dish I had used for the pie was too big. Either that or I had not made enough. It covered the base, but didn’t leave enough for the lid.
In either case, I made another lot of short pastry for the lid. The second lot was more challenging, as I had not used enough butter to begin with (I didn’t realise this until I had already added more water and flour to even it out) so I ended up adding butter, water and flour until it was satisfactory.
At this point I had much more pastry than I had needed in the first place.
Recalling similar situations from my childhood (from my father having leftover pastry) I put jam into little pockets of pastry and folded them over, baking them along with the pie.